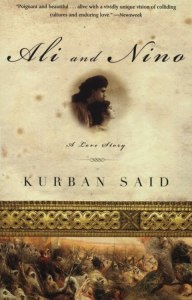 1. Early in the novel, as Ali reflects on his hometown, he thinks, “God let me be born here, a Muslim of the Shiite faith, in the religion of Imam Dshafar. May he be merciful and let me die here, in the same street, in the same house where I was born. Me and Nino, a Christian, who eats with knife and fork, has laughing eyes and wears filmy silk stockings” [p. 19]. Why does Ali love Baku so much? Why does he prefer to be an Asian rather than a European? In what ways does the above passage prefigure the novel’s main thematic developments?

2. Set on the eve of war, Ali and Nino is an intimate love story impinged upon by vast historical and political forces. In what ways do these forces threaten and ultimately destroy their happiness? How is their romance intensified by the chaotic period in which they live? Is there any sense in which Ali and Nino are fortunately placed in time and circumstance? How would their lives have been different had they lived in Persia, for example, rather than Azerbeidshan?

3. When Ali asks his friend, the fundamentalist Seyd Mustafa, whether Nino should become a Muslim after they marry, he replies, “Why should she? A creature without soul and intelligence has no faith anyway” [p. 96]. And later Ali’s father advises him to refrain from beating his wife when she’s pregnant but assures him that he must be her master. How does Ali react to these characterizations of women? Does he think of Nino in these terms? In what ways does their relationship defy these expectations? Do you think attitudes toward women in Islamic countries have changed much during the sixty years since the novel was published?

4. Why does Nachararyan “kidnap” Nino? Why is it significant that he wishes to marry her in Moscow and then take her to Sweden? What is the symbolic value of Nachararyan fleeing in a car and Ali chasing him on a horse? Of the way Ali kills him? What larger trust has been betrayed by Nachararyan’s treachery?

5. When Nino visits Ali in hiding, he says that “she hid her face on my breast, and every movement of her slender body was like the call of earth, thirsting for the fulfilling benediction of rain. Tenderly I moved the cover down. Time stood still” [p. 172]. What has Nino risked to make this visit? What does this risk say about the nature of her love? In what sense is their love made of something more fundamental than customs and cultural expectations? In what sense does it exist outside the realm of time?

7. In many ways Baku, with its multi-ethnic population, is a metaphorical marriage of East and West, Asia and Europe, tradition and modernity. How does Ali and Nino’s literal marriage bring these cultural oppositions into union? What tensions arise because of their different backgrounds and desires? How do they resolve these tensions?

8. Why is Ali swept up in the religious procession of flagellants and dervishes in Persia? What state is he trying to achieve? Why does Nino react so vehemently when she sees him behaving like a “fanatic barbarian” [p. 238]? Why doesn’t Nino leave him at this point?

9. Ali describes camels coming into town “with long sad steps, carrying sand in their yellow hair, looking far into the distance, with eyes that had seen eternity” [p. 113]. Elsewhere, he says “Darkness enfolded our town, and it seemed to be an animal in ambush, ready to pounce or to play” [p. 16]. What is the effect of this kind of writing? What other metaphors or especially vivid or imaginative descriptions stand out in the novel? How would you characterize Kurban Said’s style? In what ways is that style suited to the story?

10. How is Nino forced to behave in Persia? How is her character more fully revealed in these constricted circumstances? From whom does she exact a measure of revenge? In what ways is it important for the novel to show us this world?

11. Throughout the novel, Ali’s love for his country and his culture come into conflict with his love for Nino. Why do you think he chooses to stay and defend the short-lived Republic of Azerbeidshan, even though he knows it is doomed, rather than flee to Paris with Nino and their child?

12. Given Ali’s character and beliefs, is the outcome of the story inevitable? What does Kurban Said seem to be saying about the fate of romantic love in the face of impersonal historical forces? Is it significant that Ali’s destiny is determined on a bridge? What is the emotional effect of the novel’s ending?

13. Near the end of the novel, we see Ali in the act of writing it. And we’re told that the book has been rescued by his friend Iljas Beg. Does this narrative device alter the effect of the story?

14. Much of the novel’s charm comes from its vivid depictions of traditional ways of life. One such scene occurs during the poetry duel, before which “two valiant lords of song” hurl insults at each other. “Your clothes stink of dung, your face is that of a pig . . . and for a little money you would compose a poem on your own shame,” says one. “You can’t sell your talent because you never had any,” replies the other. “You live off the crumbs that fall from the festive table of my genius” [p. 45]. What do such scenes add to the novel? How are they relevant to the approaching political and cultural upheaval? Where else in the novel do you glimpse a way of life threatened with extinction? Where else do you find comic relief?

15. In what ways does reading Ali and Nino deepen your understanding of recent conflicts in the region involving former Soviet Republic and Muslim minorities?

back to Ali and Nino